Save Up To 30% Off Bison Stairlifts

Are you looking for a new or reconditioned stairlift?

What type of stairs do you have?

So we can check coverage in your area

We are searching for the best stairlift suppliers in your area.

We have found 3 trusted suppliers in your area

What is your name?

Please enter your phone number and email address below

To get your FREE No-Obligation prices and save up to 33%, please check your details are correct:

Bison Bede began making stairlifts in 1981. At first Bison stairlifts were manufactured for the NHS and local authorities. They were then sold through approved dealers across the UK. They offered several straight stairlift models, such as the Bison Classic and the Bison Compact, which was replaced later by the Bison 50. The Bison 80 was the first curved stairlift to operate on a modular rail system.

The company was acquired by Acorn Stairlifts in November 2007 and its factory ceased production in 2009. The Bison 80 modular rail concept was adopted by Acorn for their Acorn 180 model.

Many people still have a Bison stairlift installed in their homes and used Bison models are sometimes advertised for sale. Unfortunately spare parts for Bison stairlifts are no longer available. So if a Bison stairlift develops a fault and needs repairs it is usually necessary to replace it with a new stairlift.

The Bison 50 is designed for straight stairs. Its slimline size means it can be fitted on narrow and steep staircases where a standard size stairlift wouldn’t fit. Its footrest is near the floor and stops level with the top step so there isn’t a big step when the user mounts or dismounts. There’s an option of a remote control operated automatic parking facility. This parks and folds away the stairlift when it’s not being used. The Bison 50 has a heavy duty weight capacity of 28 stones.

The Bison 80 is designed for curved staircases with bends or corners. It shares the main features of the Bison 50 straight stairlift, but operates on a modular rail that can be installed on nearly all curved staircase configurations. When it goes round a bend the Bison 80 automatically adjusts its speed and seat level to ensure a smooth and safe journey.

Get Your
FREE Buyer's Guide! 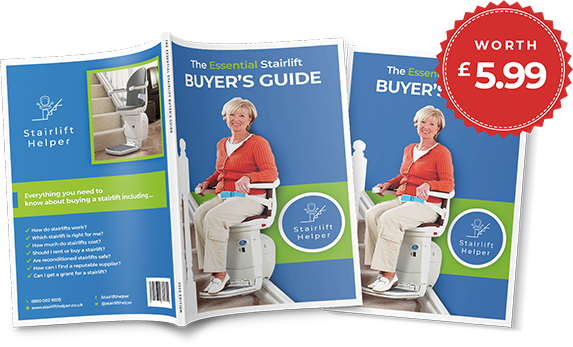